Towards 1680
White marble
Signed (on the front): « J.F. Parodi »
At the front, on the drapery: a small chip and a crack, due to a fault in the marble

This sculpture, whose location was lost by art historians for over a century and a half, is a major work by the famous Genovese artist of the 17th century, Filippo Parodi. The son of a carpenter, he learnt how to master the high technicity of marble carving during two stays in Rome from 1661 to 1667, then at the beginning of the 1670’s. He was, according to ancient unverified sources, trained in the workshop of Gian-Lorenzo Bernini (1598-1680) or at least in that of Ercole Ferrata (1610-1686. He was also strongly influenced by the genius of the sculptor Pierre Puget (1620 -1694) (fig.1). Indeed, the French artist stayed in Genoa from 1661 to 1668 and Parodi was able to see his work during several commissions they shared.

All the virtuosity of his art is visible in this imposing and irregular block of marble, representing his personal vision of Nativity. If the influences of Bernini and Puget appear clearly in this masterpiece, so do Parodi’s specific hand and style which legitimate the important role played by this Genovese artist at the end of the 17th and beginning of the 18th century, in the spread of Roman baroque in Liguria.

By adopting in his composition the antique archetype of the sleeping Cupid, the artist presents the Christ Child resting on a great drapery whose folds, both ample and angular, are a synthesis of the influences of the master of Roman baroque and the specificities of Puget’s style. Falling out of this enveloping drapery, voluptuous and protecting, a few ears of wheat and wisps of straw modestly evoke the precariousness of the crib in Bethlehem. Parodi here reinterprets the theme of the sleeping Christ Child, a theme which is dear to the local pictorial tradition, as depicted by painters Giovanni Benedetto Castiglione (1609-1664) or Valerio Castello (1624-1659). Even if this scene is undoubtedly a prefiguration of Passion, it is devoid of any sense of morbidity: in an attitude of absolute confidence – arms wide open, hands open, one palm turned towards the heavens – the Child Christ appears abandoned to a deep, peaceful sleep. The chubby flesh of the baby boy is represented with sincere tenderness and discrete naturalism, the small sleeping body meddling with the folds of the drapery which seem to have given birth to him. The calm expression of his face – whose very hemmed lips and the slightly turned up nose are recurrent in Parodi’s work – illustrates with accuracy and devotion the idea of Beatitude. The left arm and the two legs are aligned in a beautiful parallel movement which contrasts with the position of the right arm. The latter, folded, seems to hang heavily, accentuating the feeling of abandonment of the Child king, serene in the impenetrable lethargy of the heavy sleeper. Beyond the terrible episode of his Passion, the halo which crowns his little toddler’s head is already a prediction of his victorious Resurrection.

This theme of the humanizing of Christ in a more global context of the Prefiguration of the Passion, as well as the general composition and the resulting finish, echo a small group of works made by the artist at the beginning of the 1680’s. As pointed out by the author Carlo Milano, these works consist in four sculptures of the dead Christ: two sculptures made out of polychrome wood executed respectively for the church San Luca di Genova and the church of the Carmelites in Santa Teresa di Savona and two marble sculptures, one executed for the hospital of San Carlo Voltri, and the other for the basilica of Santa Giustina in Padua.

Just like the Cristo morto (fig.2) which was commissioned towards 1680-1881 by a member of the powerful Spinola family, this work was probably executed for another governing family of the Genovese republic, the Durazzo family. It is indeed in the most important of its residences, the Palazzo Reale, ancient Balbi palace purchased by Eugenio Durazzo (1630-1705) in 1677, at a moment when the family was at the height of its power, that the work is located in 1767.It is likely that Eugenio Durazzo, who had called upon Parodi at the same time as he was employing the architect Carlo Fontana (1638-1714) to transform the palace in the latest Roman fashion, commissioned this work to him. For another sculpture by the artist, representing a Christ at the colomn (fig. 3, dimensions 90 x 43 x 22 cm, kept at the Palazzo Reale in Genoa) and located in 1677 in the palace’s private chapel, it is generally recognized that it was commissioned in 1677-1680 by Eugenio or his wife. After having been kept until the beginning of the 19th century in the Durazzo family, the Sleeping Christ Child passed into the hands of the Serra family, most likely thanks to a game of matrimonial arrangements. It was kept in the collections of the marquis Gerolamo-Serra (1761-1837), great politician, defender of the independence of Genoa and author of a voluminous history of the City-State published in 1834. After his death in 1837, the work was sold by his descendants; it was then purchased in 1844 by the great Belgian art lover, the viscount Charles Hippolyte Vilain XIIII (1796-1873). This diplomat and member of the national congress who served a long time as ambassador to Italy, made it possible for the public to discover this remarkable sculpture thanks to an exhibition held in Brussels in 1855. The location of this work seems afterwards to have been lost, until the historian Carlo Milano rediscovered iand presented it in the catalogue of the exhibition about Durazzo’s Collection, held in 2004 at the Palazzo Reale.

The Sleeping Christ Child represents one of the most important stages of Parodi’s career. Its date, around the 1680’s, marks a real transition between a production still very much influenced by the great baroque masters, and his own, more independent and enthusiastic style. 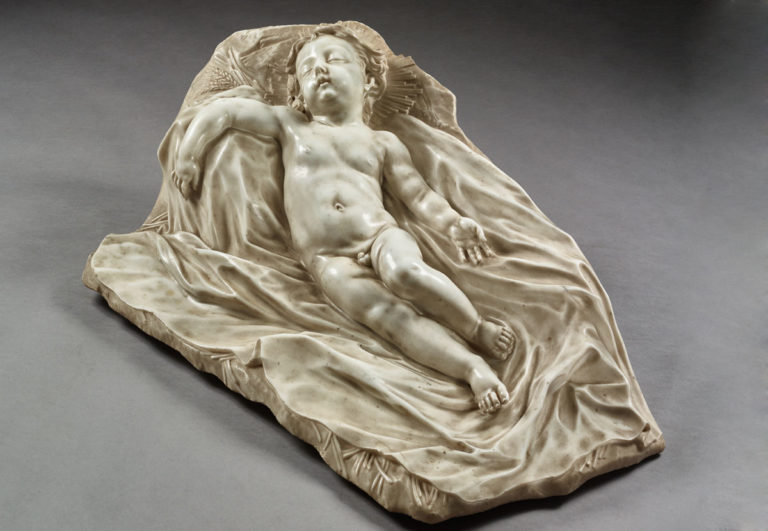